K-State students designed a prototype of solar homes that cost about $100,000 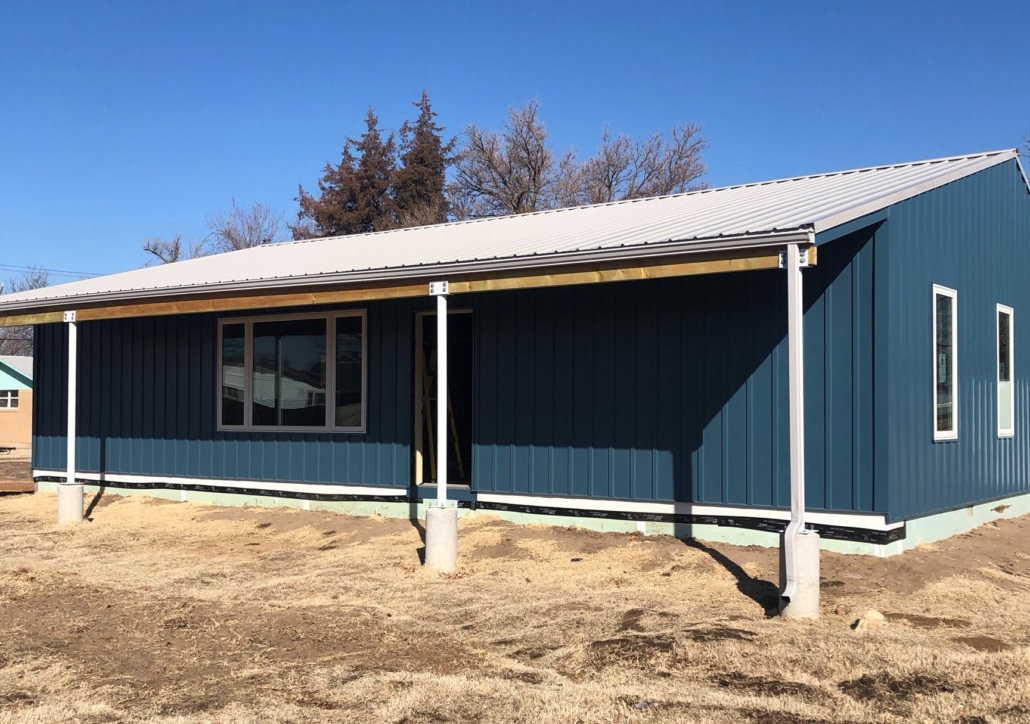 On a recent Friday, three Kansas State graduate students, fondly dubbed the “A-team” by their professor were working on a house in St. John, a small town of less than 2,000 about an hour and a half northwest of Wichita. They had gotten up at 5:30 that morning to drive two and a half hours from Manhattan, Kansas for their class project.

To design and build a home that will make as much electricity as it will use, but will be affordable enough for a median-income family to live there.

It’s a seemingly tall order, but the students are building the home and soon there will be nine more like it built by contractors throughout central Kansas.
The house will have three-bedrooms and two bathrooms and is expected to have $0 in annual net energy costs, if the homeowners operate the house right, being conservative in their energy use. The mortgage will be between $100,000 and $125,000.

The Net Positive Studio was started in 2018 by Michael Gibson, a licensed architect and associate professor of architecture at Kansas State University, who teaches students to design and build homes for demonstration and partners with nonprofits to help fund the projects and get them built.

“K-state is not gonna build 50 houses a year, but what we can do is we can show a different approach to doing this,” Gibson said. “We can show a type of house and the type of construction that you don’t see very much in Kansas.”

In the U.S., median home prices have risen four times the rate of household incomes, and part of the reason is that the average size of houses has gotten larger and larger.

“We’re becoming this nation of big, expensive houses, and that’s not what people need,” Gibson said. “There’s this whole segment of society … the workforce in an area just can’t afford the housing. And it becomes an economic problem because people have to live somewhere.”

Workers being unable to find affordable housing is a problem across the state, as cheaper housing is disappearing and the cost to own a home or rent is rising. The issue has been documented in Johnson County and more recently in January when a Salina company wanted to double the number of employees but struggled because their workers couldn’t find a place to live.

In The Net Positive Studio’s project study, they found a similar problem in Stafford County. Every year since 2000, an average of 2.6 homes were built, but 13.9 homes were demolished.

The house is a demonstration project, showcasing how solar can be used on affordable housing, according to Gibson. The house was designed by a previous year’s class, but because of COVID-19 restrictions, they couldn’t build it.

The K-State house is designed with multiple integrations of technologies, like solar panels, insulation, and energy-efficient windows. Since the house is well designed, the solar system can be smaller and less expensive because the house needs less energy to function.

“The sad truth is that those who can least afford inefficiencies are usually in the least insulated, worst conditions in terms of energy bill,” said Donna Schenck-Hamlin, the project manager for the studio. “The challenge that the studio is making to the public and to the construction industry is that we are going to demonstrate that we can afford to create, and homeowners can live in, houses that are not going to gouge them and make them cost-burdened.”

The house also will have insulated walls and vaulted ceilings, which help with energy use, ceiling fans and lots of external light.

“Quality of housing has always got to accompany discussions of affordability,” Schenck-Hamlin said. “Quality, not just in terms of what it’s going to run in the housing advertisement like the number of bedrooms or bathrooms, but the durability and the insulation and energy quality of the house, because to afford to reside in a place is more than just the mortgage you’re paying.”

The K-State house will be one of many as the Stafford County Economic Development, a local nonprofit, received grant funding to build nine more houses of this design. They presented the K-State house as a prototype and received two grants from the Kansas Housing Resources Corporation HOME Program and the Federal Home Loan Bank Affordable Housing Program.

Now, they’re just waiting on contractors to sign on.

Stafford County Economic Development plans to develop the homes and then rent them out because rental housing is the hardest to come by in St. John, and there is high demand.
“It’s kind of a paradox, here in rural Kansas. We want more people, but we don’t have good housing,” Dunn said. “If we were to build what is considered moderate-income housing that’s still $200,000 and that’s not cracking the nut here.”

They will build nine more of these houses, three of which will be in St. John, three in Stafford, two in Macksville and one in Hudson, using land where dilapidated houses were torn down so the streets, sewers, electric and other infrastructure are already in place.

TRADE-OFFS OF THE HOUSE

The house won’t have a basement, which is a cost-cutting measure, as digging and pouring basements can be 20-30% of the house cost, Gibson said. Kansas is in tornado alley, and St. John has a town tornado shelter, but Gibson said a better option is to put a shelter in the yard. They usually run about $2,000 and offer more protection than a basement.

When talking to St. John residents about the homes, they often cited the lack of a basement or an attached garage as a reason for not wanting to own the home, Dunn said. But for renters, they said the tradeoffs are completely acceptable.

The house also doesn’t have an attic, which was an intentional choice to add to the energy efficiency of the home. Instead, the students have designed the house with extra storage and high ceilings.

Additionally, the house is prefabricated, which can turn people away from homes, as people usually think about trailers when it comes to prefabricated homes. But trailers have a lot more trade-offs than a project like this, according to Gibson.

​“We needed to find a way to make new housing that’s affordable and can compete with the mobile home in terms of affordability, but offers much more energy efficiency, can be mortgaged and won’t carry the stigma because it’s a permanent structure,” Dunn said, adding that mobile homes lose value or are done after 30 years, while most mortgages are being paid off at 30 years.

The Spirit of Kansan: Can’t Never Could Do Anything