Stafford County Economic Development (EcoDevo) started as a grassroots effort encouraged by Farm Bureau and supported by the Stafford County Commission. Officially incorporated in 2011, it was developed to promote economic and population growth throughout the county.

EcoDevo is a 501(c)3 non-profit organization. This designation has allowed the organization to pursue grant funding, leverage resources, and invest in our communities.

In the fall, a $15,000 grant from Kansas Farm Bureau was awarded for the strategic planning and training. The Stafford County Commissioners named an advisory committee and training began.

In September, a board of directors was established, and Stafford County Economic Development was incorporated as a Kanas Not-fo-Profit Corporation.

Stafford County was designated as a Rural Opportunity Zone (ROZ) by the Kansas Legislature.

Stafford County was chosen as a NetWork Kansas E-Community.

Stafford County Farm Bureau (a key supporter in starting Eco Devo) was chosen as a “County of Excellence” by the American Farm Bureau Federation based on their leadership and innovative projects they sponsored during the year (entrepreneurship contest and entrepreneurship camp).

The first small business loans were made through our E-community partnership. Five were made in 2012.

The organization filed for 501(c)3 status.

A group of Stafford County residents took a bus trip to Atwood to learn about how they cultivate entrepreneurship and youth engagement.  Farm Bureau gave a grant to cover the travel expenses.

A Specialty Crop Block Grant from the Kansas Department of Agriculture provided funding for a high tunnel and technical assistance to 5 county residents interested in growing produce.  This project was continued through the spring and summer of 2013.

The wind tunnel project continued with workshops and construction.

EcoDevo was selected for a Kansas Community Service Tax Credit award that would allow EcoDevo to generate funding for our first housing development: a duplex in Macksville.

Ideas began forming for a business incubator in Stafford County.

A concurrent resolution was passed in the Kansas Legislature authorizing the creation of a port authority in Stafford County.

In April, EcoDevo broke ground on a duplex in Macksville. Construction was completed in October.

EcoDevo continued to be involved with the Healthy Communities Initiative.

In January, the Stafford County Commissioners passed a resolution authorizing the creation of a port authority.

EcoDevo bought and started renovating a house in Hudson.

The Healthy Communities Initiative continued with a focus on community improvement projects that promoted walkability and was rebranded to Live Well Stafford County.

In December, EcoDevo broke ground on a new single-family home in Stafford.

In January, renovations on the house in Hudson were completed.

The Dillons grocery store in St. John closed and a citizen-driven effort started to recruit a new grocer. Eventually, EcoDevo was asked to assist with this effort.

The idea for a business incubator gained traction and land was purchased to construct a new building. EcoDevo was awarded several grants to develop a facility.

Construction was completed on the single-family house in Stafford and a family approached EcoDevo about buying it. In July, it sold.

EcoDevo assisted Stafford County in getting a grant that would provide four individuals/families with a $25,000 down-payment for the construction of a new house.

Plans were developed to construct a new grocery store. White’s Foodliner signed a letter of intent to operate the grocery store. EcoDevo worked tirelessly to secure funding for the project, including a $780,000 Health & Human Services grant.

An existing building on the square in downtown St. John became available. EcoDevo chose to purchase it for the location of the business incubator rather than proceed with constructing a new building. Stafford County Drug opened in the building while waiting for the new grocery store to be constructed.

EcoDevo arranged for a group of Stafford County residents to attend the Kansas Leadership Center’s You.Lead.Now. Conference in Wichita.

EcoDevo was approved as an AmeriCorps VISTA placement site with three positions through a partnership with Wichita State University.

A new grocery store facility was constructed in St. John. The Stafford County Marketplace, a full-service grocery store, pharmacy, and fuel station, opened on Wednesday, October 10th to the public.

EcoDevo board members, staff, and a County Commissioner toured warehouses and shared workspaces in Wichita to gather ideas for some potential projects in Stafford County.

EcoDevo and Pawnee County Economic Development teamed up to offer an 8-week entrepreneurship certificate program. It was open to Stafford and Pawnee County residents; half the meetings were held in Larned and half in St. John.

EcoDevo wrote and received a grant to renovate the business incubator and remote work space at 311 N. Broadway in St. John. Workspace 311 opened in August. Over the summer, EcoDevo also looked into replicating the project in Stafford.

EcoDevo began working with the K-State’s Net Positive Studio in the College of Architecture, Planning and Design. In the fall, the graduate students developed concepts for an affordable, energy efficient house that they would build in Spring 2020.

Two more AmeriCorps VISTAs served with us.  One as our Community Development VISTA and the other as our Arts-Focused Community Relations VISTA.

Artist Inga Ojala painted a mural depicting the founding of St. John at the corner of 2nd and Main in St. John.

Two Bike & Build VAAPs volunteered in Stafford County for 8 weeks working on housing and other projects.

Delayed by the pandemic, K-State’s Net Positive Studio built started in August 2020 with the assembling of panels.

EcoDevo was awarded two grants that will allow us to replicate the K-State prototype 9 times.

The affordable, energy-efficient house built in conjunction with Kansas State University’s College of Architecture, Planning and Design was completed in August 2021. It’s a 3-bedroom 2-bathroom house that totals around 1,100 sq. ft. It is the prototype for nine additional house we are building throughout the county. We broke ground on one new house in Hudson in September. Construction on three new houses in Stafford began in October.

A grant in late 2020 spurred progress on the development of a port in Stafford County. A lot of time and energy went into furthering the Port Authority of Stafford County.

Two more AmeriCorps VISTAs joined our team.  One as our Arts-Focused Community Relations VISTA and the other as our Workforce Development VISTA.

Housing, childcare, and industrial development were the primary focuses in 2022.

Progress continued on the construction of new rental houses based on the design of the affordable, energy-efficient house built in conjunction with K-State. One house was completed in Hudson (February) and three in Stafford (June). The three in St. John were nearing completion and the foundations were poured for the two in Macksville.

The Stafford County Child Care Committee made strides to establish a location for two new daycares to operate from. Funding was secured from the City of St. John, the County, local businesses and individuals, and a couple of small grants. A dilapidated house was torn down and a modular classroom was brought in. There are modifications that need to be made and the licensing process is lengthy. It should be operational by mid-2023.

The Port Authority of Stafford County continues to move forward. It was successful in securing $5 million toward its rail infrastructure development. You can learn more about the Port here. 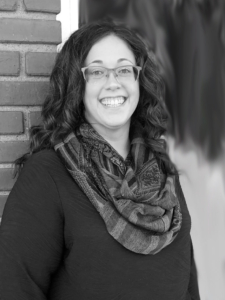 Kathleen was promoted to Executive Director in January 2022. She joined EcoDevo as the Assistant Director in December 2020 and had also served as an AmeriCorps VISTA with EcoDevo for most of 2019. Kathleen has a background in workforce development and nonprofit management. She brings a passion for helping others by removing barriers, providing support, and expanding opportunities.

After serving as the executive director for 10 years, Carolyn decided to reduce her hours and role to take on some other opportunities. Carolyn continues to assist with grant writing and carrying out projects as a part-time Strategic Projects Manager. She has a strong background in economics, business, and grant writing. Her vision and drive have propelled the work of this organization since its founding.

Board Meetings are held the second Tuesday of the month
at 7:00 AM in our office (311 N Broadway St, St. John).

Our Board of Directors