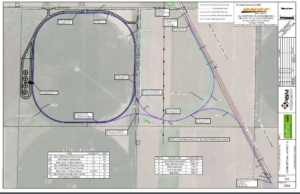 STAFFORD, Kan. — While Reno County lost out on the Building a Stronger Economy (BASE) grant program, Stafford County did make the list.

The Stafford County Port Authority will receive $2.5 million to help fund a transload facility near St. John.  If all goes as planned Wind River Grain of Garden City would build a grain terminal at that location. The 256 acre parcel would include a large rail spur loop that could handle full size unit grain trains of more than 100 cars. BNSF has already agreed to service the facility which carries an estimated to cost between $7 and $10 million.

That means, while the proposal is moving forward, the authority will still need to find more funding to make the long planned project a reality.

With the Port Authority owning the land and rail infrastructure,  it can also lease access to other businesses and products which could include but is not limited to aggregate, fertilizer, wind components, general manufacturing, warehousing and distribution. The hope is to make it a consolidation point for containers to establish a regional access point to BNSF.

Wind River will invest in the grain storage bins, high-speed load out equipment, and all facilities needed to establish operations. It will lease space and pay fees to access the rail infrastructure. The expansion for Wind River is expected to create 8 to 10 direct jobs and up to 30 trucking jobs. It is also expected to bring a broader benefit to farmers through improved grain prices.

The port authority was established in Stafford County in 2014 with a study to help development of the project starting in 2018. In 2020 a $150,000 grant was used to fund legal expenses and engineering for the project.