The Current State of Housing in Stafford County

Lack of housing has become an increasing issue. The current housing stock in Stafford County is generally old, not in good condition, and of lower value. The construction of new houses significantly decreased during the 1960s and never really rebounded. This lack of new development paired with properties falling into disrepair and having to be demolished has resulted in a net loss of 225+ houses over the past twenty years. Since 2000, the county has lost an average of 13.9 houses a year with an average of only 2.6 new houses being built per year. Moreover, there are a couple of years where not a single new house was built and several more years when only one house was constructed.

*These are tax valuations, which are not necessarily equivalent to fair market valuations.

The housing market in Stafford County is tight; there is little housing available for sale or rent at any given time. This makes it hard for employers to recruit workers, and for young adults to move out of their parents’ houses or return to the county. There is not enough housing for the existing available jobs, let alone for any business growth or development. With only around 20% of the housing stock available as rentals (nationally and statewide approximately 1/3 of housing is rental), those relocating to Stafford County have a particularly challenging time especially if they are not able to find or qualify to buy a house. The three school districts in the county continually struggle to recruit new teachers and part of that challenge is the lack of available housing. In 2021, when a company looked at establishing an operation in Stafford and creating 30 jobs, its biggest concerns were that there was not enough workforce paired with there was not enough housing to bring in the necessary workforce.

Without investment in more housing development, the housing shortage in Stafford County will only get worse.

The Cost of Construction

Even before the pandemic, the cost of building a new home was significantly higher than purchasing one of the existing houses in Stafford County. The average value of new homes built in Stafford County over the last 10 years is $269,252.

EcoDevo built a “moderate income” single-family home in Stafford that was 3 bedrooms 2 bathrooms with an unfinished basement and an attached garage. It cost around $165,000 to build in 2015. Just 3 years later the cost to build that house had increased by about $30,000 and today it would cost over $250,000 to build the same house. When the County offered a $25,000 down payment assistance grant for individuals or families to build new houses within city limits, only 2 of the 4 grants were utilized during the 4-year period. Those “moderate income” houses were built for under $200,000 and today would cost over $250,000 to build. The majority of houses that are considered “moderate income” now have a starting price of $300,000 and a custom house starts around $500,000.

It took a year for EcoDevo to find a contractor able to build our current housing project within the existing grant and loan funding. The architectural estimate for the 3 bedroom 2 bathroom 1,100 sq. ft. prototype house was $110,000. The 3 bids we received from actual contractors for additional houses were $127,000, $184,000, and $228,000. The project wouldn’t have happened at either of the higher bids. The total cost for each house is coming in around $135,000, which is expected as the bids strictly cover construction costs and not other things like land surveys, transferring deeds, establishing a lawn, etc. These are not high-end, luxury houses. They were built to be affordable and are well designed in terms of maximizing the use of square footage and being energy-efficient.

The median family income in Stafford County has been around $65,000 for the past few years (it was recently adjusted to $72,000 to account for inflation, though we haven’t necessarily seen local wages increase). Houses costing $250,000 or more are not affordable for the average Stafford County household. Below are several profiles with estimated monthly expenses showing what various households can afford. A household would need to be making over $125,000 to be able to afford a $250,000 house. 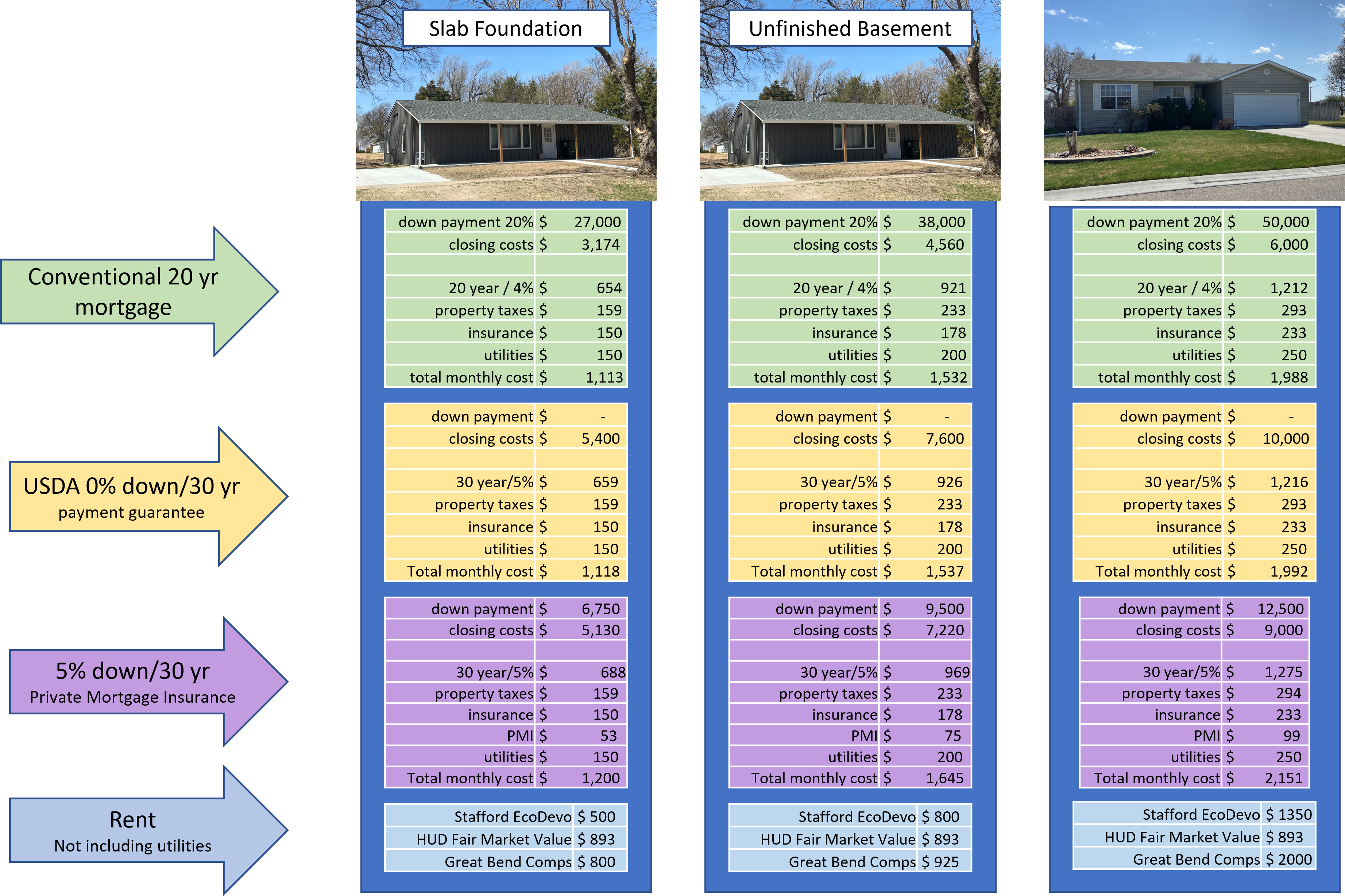 We desperately need more housing. In a county-wide survey of economic development priorities conducted in 2020, citizens ranked housing as a leading priority. The lack of investment and development over the past several decades has significantly contributed to this crisis. And, it doesn’t help that most new construction is not affordable to the average household in Stafford County. The best time to build houses would have been 10 or 20 years ago; the next best time is now. The cost of construction will only continue to rise and we can’t go back and change what’s been. Investing in our county now is what will set the stage for future development: housing, business, etc. The more we invest in ourselves the more opportunities there will be in the future whether through grant opportunities or private investment.

Housing inventory data was provided by the Stafford County Appraiser and analyzed by Stafford EcoDevo Staff.